This is from the Warcraft universe.
This has been removed from Heroes of the Storm. 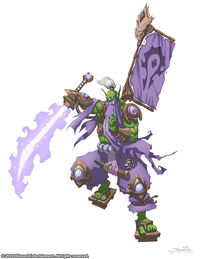 Za'Muro is an orc blademaster who appeared in early builds of Heroes of the Storm. He was one of the very first heroes developed for the game. Inspiration was taken from the Dark Templar of StarCraft.[1] In early builds, Za'Muro benefited from strength items. The more foes he faced, the stronger he became.[2] He was originally known simply as "Blademaster" in the 2010 build.[3]

As with all heroes in the game, Za'Muro had a "good" and "evil" appearance. In his case, the most notable difference is that he appeared as a standard greenskinned orc in his "good" form and as a fel orc in his "evil" one.[4]

His stats and abilities were as follows:

Samuro was revealed as a playable character in October, 2016.[6]

Za'Muro was the greatest of the Blademasters. He could not be defeated in battle and so he began a quest to find his equal. He has wandered across the metaverse for untold centuries, searching for the ultimate adversary.[2]

Retrieved from "https://heroesofthestorm.fandom.com/wiki/Za%27Muro?oldid=53100"
Community content is available under CC-BY-SA unless otherwise noted.