Heroes of the Storm Wiki
Register
Don't have an account?
Sign In
Advertisement
in: Battlegrounds, Warhead Junction, Koprulu Sector

"Once a testing facility for nuclear weapons, Warhead Junction has since fallen into ruin. However, the site's abandonment hasn't stopped its glitchy Adjutant from continuing to produce and hand out nuclear weapons. Join the arms race of Warhead Junction, build up your stockpile, and rain hell on your enemies!"

The Warhead Junction is a three-lane battleground. Collect Warheads as they periodically spawn in order to activate a Nuke. Launch the Nukes to destroy the enemy team's Structures.[1]

The first Battleground objective event will activate 3 minutes into the match, following a 30-second warning.

The "Warhead Junction" battleground has three lanes with all of the objectives located near the middle of each lane on the map. 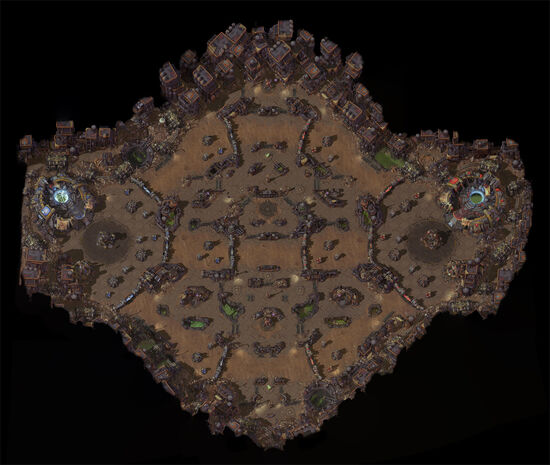 There are five Mercenary camps to be recruited in this battleground. Mercenaries are enabled during the Battleground Mechanic (Warhead spawns).

Warheads spawn across the map. The players have to go out and capture them. Once they do, they get an activated nuke ability on their Command Card. The Warheads do a huge amount of damage in a large area and do percent damage to Heroes. Multiple Heroes can have nukes at the same time (limit 1 per Hero) so that they can coordinate and cast them together, or they can do individual strikes with them. If you are killed, though, you drop the nuke and either team can channel to pick it up, and use the nuke as well.

To pick up a Warhead a Hero has to channel it for 5 seconds. Each hero can only hold 1 nuke at a time (For The Lost Vikings, each Viking can hold one). Use it or you will drop it when you die! For 5 seconds after picking up, you cannot use your nuke. Nukes have a 1.5-second cast-time and, once cast, take 4 seconds before exploding. If you channel a nuke and are interrupted via Stuns or Knockbacks, the Nuke will go on a 10 second cooldown.

Call Down the Thunder[]

Launch Nukes to devastate the enemy team's Structures. Nukes deal 2,300 (+70 every minute, up to 4,050 damage) damage across the entire area of impact. For example, at minute 20, they deal 3,700 damage. The exception is heroes. Nukes hit Heroes for 30% of their maximum Health.

Every 18 seconds, the Core launches a Nuke at a nearby enemy Hero, dealing 30% maximum health to enemy Heroes hit.