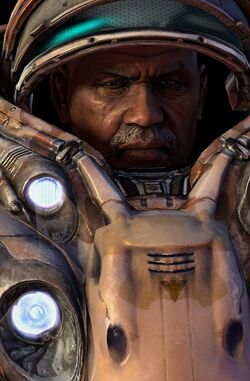 Warfield appeared in early builds of Heroes of the Storm, commanding a siege tank.[1] His siege tank had low-damage area of effect attacks and mines for killing minions.[2] He was removed from the game however, as upon reflection, Warfield had never actually been seen driving a siege tank in the StarCraft games. His role was taken by Sergeant Hammer.[3]

Retrieved from "https://heroesofthestorm.fandom.com/wiki/Warfield?oldid=53099"
Community content is available under CC-BY-SA unless otherwise noted.