Heroes of the Storm Wiki
Register
Don't have an account?
Sign In
Advertisement
in: Battlegrounds, Overwatch, Volskaya Foundry

The frigid mechworks of Volskaya are a notorious hotbed for conflict and corporate backstabbing. On this frosty Battleground, the heroes of the Nexus vie to wrest control of enormous Protector mechs and blast their opponents to smithereens.

The first Battleground objective event will activate 3:00 minutes into the match, after a 30 second warning.

Russia was one of the countries hit hardest by the Omnic Crisis, but during the rebuilding process, it rode the wave of the mechanized labor industry's revitalization and entered a period of rapid growth. However, after recent attacks from the long-dormant Siberian omnium, Russia has returned to war footing, guarding its sparkling cities with the massive, human-piloted Svyatogor mechs developed and produced by Volskaya Industries.

The "Volskaya Foundry" battleground has three lanes with one Control point in the middle of each lane. 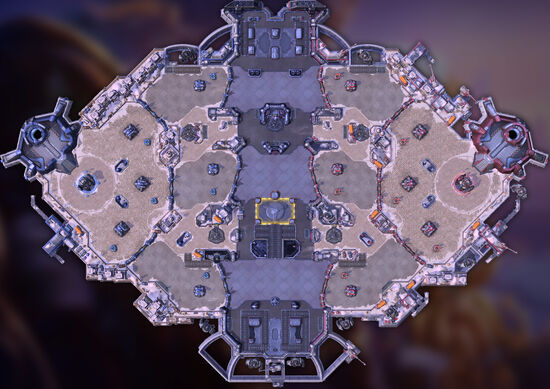 Each capture point is connected to a unique conveyor layout - they can be used to boost mobility around the battleground, to force enemies out of position, and more. Control points activate occasionally. Stand within them to capture them. True to Overwatch style capture points, this battleground will feature the overtime mechanic. Progress will not increase from 99% to 100% as long as one enemy player is contesting the point. However, unlike Overwatch, at least one player needs to stay on the capture point to maintain control over it. The Triglav Protector will spawn once the capture point reaches 100%.