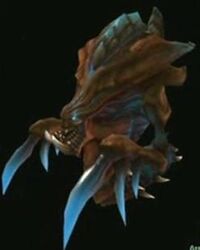 Vaevictus appeared in the 2010 build of the game. Here, he was known simply as "Hydralisk."[1] Vaevictis had short-ranged attacks and was an expert in killing enemies that got too close. He benefited from dexterity items.[2] By BlizzCon 2011 he seemed to have been remade into a siege hero.[3] He had the following stats and abilities:

The zerg have many terrible creatures, the most elite among them being the famous Hydralisk strain known as "Hunter Killers." Chief among these creatures is Vaevictis, a ferocious killer who was chosen by the Swarm to hunt down the greatest threats to the zerg.[2]

Retrieved from "https://heroesofthestorm.fandom.com/wiki/Vaevictis?oldid=53104"
Community content is available under CC-BY-SA unless otherwise noted.