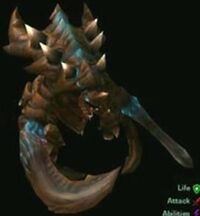 Ultimaton appeared in early builds of Heroes of the Storm. Ultimaton was very difficult to kill, and even more difficult to avoid. It benefited from strength items. It had the following stats and abilities:

Most zerg creatures die within the first few minutes of a battle. A lucky few will survive longer, evolving in combat as they meet the guns of their enemies and becoming more powerful every hour. Ultimaton has been fighting for over three years...eating, killing, and evolving.

Retrieved from "https://heroesofthestorm.fandom.com/wiki/Ultimaton?oldid=53103"
Community content is available under CC-BY-SA unless otherwise noted.