This is from the Diablo universe.
"It seems that mischievous Treasure Goblins have snuck into the Nexus alongside the arrival of the Burning Hells. These devious creatures are intent on pilfering as much gold as they can carry, and while their numbers are yet unknown, the fortunes they've scavenged must be returned! Adventurers that manage to slay any Treasure Goblins they encounter during the Eternal Conflict will be handsomely rewarded. A Treasure Goblin will do anything in its power to evade those it deems hostile, so dispose of these timid beings swiftly, lest they open a portal and slip away!" 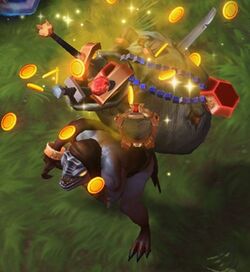 Treasure goblins are a type of demon from the Diablo universe. During the Eternal Conflict event (30 June 2015 to 8 September 2015),[1] they spawned in the first thirty seconds, within each team's starting area, prior to the gates lifting. In this time, players had the chance to kill the goblin for extra gold before it disappeared through a portal.[2]

They were removed after the end of the Eternal Conflict event.[3]

As of the introduction of Kharazim to the game, a treasure goblin can be found on the login screen by clicking on the trees. This will trigger a duck to fly across the screen, allowing the player to shoot it with their mouse. A treasure goblin will appear to either hold up the duck (if shot) or cackle (if it flies away). This is a reference to Duck Hunt.

Retrieved from "https://heroesofthestorm.fandom.com/wiki/Treasure_goblin?oldid=39727"
Community content is available under CC-BY-SA unless otherwise noted.