Heroes of the Storm Wiki
Register
Don't have an account?
Sign In
Advertisement
in: Battlegrounds, Luxoria, Tomb of the Spider Queen

Tomb of the Spider Queen

Tomb of the Spider Queen is a three-lane indoor battleground set in the realm of Luxoria. The Spider Queen Neithis demands gems, which drop off of dead enemy spider Minions or Heroes. If a team collects enough gems, Webweavers will be summoned which will then walk down the lane besieging buildings and enemies until they are killed.

The long forgotten tombs of Luxoria have found a new master. Deep within their timeworn chambers, the Spider Queen Neithis stirs from her ancient slumber. Present her with the gems of power she seeks, and you may just escape with your lives."[1] 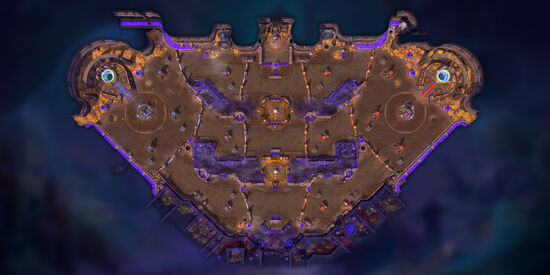 There are four Mercenary camps to be recruited in this battleground. Mercenaries are disabled during the Primary Objectives.

The unique objective revolves around collecting enough gems and hand them in one of the two Spider Queen's altars to summon three Webweavers that will travel down each lane to siege the opposing team on three fronts. The Altars will activate 0:30 minutes into the match and respawn 0:15 minutes after all Webweavers die.

To hand in gems, a Hero must channel on one of the two Spider Queen's altars for 6 seconds, during which they can be interrupted by taking damage or moving.