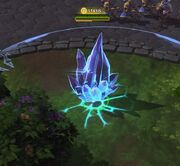 Stasis is an effect that makes the target immune to damage and untargetable by both enemies and allies, but also makes the unit in Stasis unable to attack, use their abilities and in (most cases) move for a short duration of time. As opposed to, Time Stop, Stasis still allows Cooldowns to refresh, and most abilities that grant self-Stasis can be cancelled to end their effect early.

Stasis also removes most debuffs, when it is applied. This includes not only crowd control effects that are removed by Unstoppable, but also Attack Slows, negative damage modifiers, like Armor and Spell Power debuffs, Damage over Time effects, healing received reductions and most hero specific debuffs/marks, like Zul'jin's "Grievous Throw". Units that are in Stasis cannot be affected by Time Stop. Stasis does not remove Revealed status effect.

Unlike Invulnerable targets, units in Stasis can not be targeted or affected by friendly abilities, however, Heal over Time effects, delayed heals, like Rehgar's "Ancestral Healing", and triggered heals, like Malfurion's "Rejuvenation" and "Moonfire" combination, applied beforehand resolve during friendly Stasis effects. Debuff Stasises, on the other hand, prevent delayed heals from activating, but do not affect HoTs.

Zagara's Devouring Maw is the only Stasis effect that allows damage to be dealt to the target and targetting Unstoppable enemies.

As an effect of some abilities, the hero's model is completely hidden and the unit is put on a special Stasis state while performing the ability. Units in special Stasis ignore collision with other units. Abilities that have such effect are listed below: