The Splendiferous Extravaganza is a carnival or circus located somewhere within the multiverse of the Nexus. It was put together by Gallywix and Gazlowe. It has reputedly "lost its edge". Perhaps in an effort to recover, they hired Greymane as a ringmaster; this version of Greymane can also transform into a lion.

A number of heroes are from this circus. 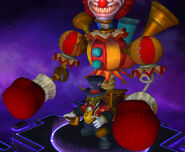 Greymane as the "Ringmaster"