"The temperature has dipped in the hollow. Snow has invaded, and with snow comes snowballs! These calamitous tools of childlike whimsy will rain chaos as enemies and allies alike fly across the battlefield—or lie crushed beneath a pile of frosty destruction. Be wary, Heroes...winter has come to the Nexus!"

Snow Brawl is a Heroes Brawl based on the Cursed Hollow battleground.

Players pick from one of three randomly selected heroes at the start of the match. Two types of snowballs appear on the ground throughout the brawl: (thrown via the F button):

When the first tribute phase arrives, two tributes will initially spawn together - one five seconds after the other. When a player picks up a tribute, a new one will spawn somewhere else after a 5 second delay, meaning there will generally be two tributes alive. This type of "rolling" tribute spawning continues until either team is cursed. Tributes do not spawn during a curse or for 60 seconds after a curse.

The event will never spawn enough tributes to allow both teams to get cursed at the same time. The enemy's core must be destroyed in order to win the match.[1] 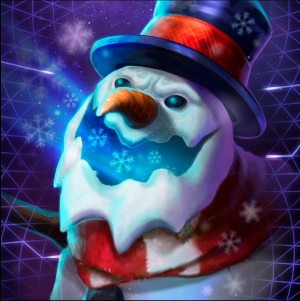 Retrieved from "https://heroesofthestorm.fandom.com/wiki/Snow_Brawl?oldid=39995"
Community content is available under CC-BY-SA unless otherwise noted.