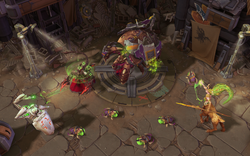 The Slime Boss is a boss based on the swarm host from the StarCraft franchise, located in the Warhead Junction battleground.

Two of them appear on the map five minutes into the game, then respawn five minutes after the last is defeated.

Progenitors of the swarm hosts, named primal hosts, were first encountered by the Swarm utilized by the primal zerg on Zerus, used against Kerrigan's forces by the pack leader Brakk. Swarm host strains were incorporated into Kerrigan's Swarm soon afterwards by Abathur, adapted through primal essence. The essences of the primal host were later adapted in to create the swarm host.[1]

Retrieved from "https://heroesofthestorm.fandom.com/wiki/Slime_Boss?oldid=48226"
Community content is available under CC-BY-SA unless otherwise noted.