Heroes of the Storm Wiki
Register
Don't have an account?
Sign In
Advertisement
in: Battlegrounds, Sky Temple, Luxoria

Floating above the vast desert sands of Luxoria, the Sky Temple serves as a center of worship for the snake god, Ka. He stores his great power within the Temples, each of them secured by Guardians. With such defenses, no warriors would think to seize the god's power for themselves... or would they?[1]

Sky Temple is a three-lane battleground set in the realm of Luxoria. The objective of the map resides within the temples located on the map. Periodically these temples will activate. Once activated, players can attempt to control the temples by standing within the grounds, harnessing the temple's lasers to attack the enemy Structures.

The first Battleground objective event will activate 3 minutes into the match, following a 30-second warning. 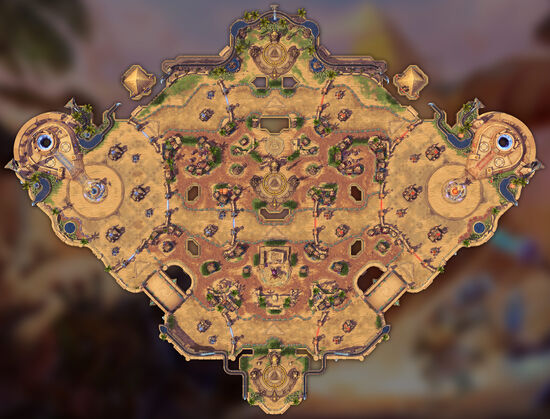 There are five Mercenary camps to be recruited in this battleground. Mercenaries are enabled during the Primary Objectives.

Sky Temple features three Temples located in different areas on the battleground. Throughout the duration of the game, any of the temples can activate, allowing players to capture them.

The location of the first Temple will appear on the Minimap 30 seconds after the game begins. The first Temples will activate 3:00 minutes into the match, following a 30-second warning. The first Temple spawn will always activate the top and middle Temples. The second Temple spawn will always activate the bottom temple. For the third temple spawn, the bottom Temple and either the top or middle Temple will activate (chosen randomly). The fourth spawn has a 50% chance of one Temple and a 50% chance of two. If it's two Temples, the Temple which was not in the third spawn must be one of the two. Therefore, overall in the fourth spawn this missing Temple has a 2/3 chance of being part of the objective. The fifth spawn is one Temple if the fourth was two temples, otherwise two Temples (the Temples being totally randomly chosen). The sixth spawn attempts to reach an activation goal of total Temple spawns since the start of the game of either 3-2-2 or 2-3-2 total activations (reading from top to bottom). Whichever of top or middle has been activated more often gets the 3. If they have been activated an equal number of times, the goal is chosen randomly. At most two Temples may be activated in this phase. In most cases, tracking the temples from the first 5 spawns allows the sixth temple Spawn to be predicted exactly.

For subsequent Temple spawns (7th and on), then starting over from now the number of Temples in the objective phase may not be the same 3 times in a row, and the exact Temple configuration may not repeat twice in a row. The Temple is determined randomly subject to these constraints.

The Temples, from top to bottom, are named:

Capturing a Temple requires merely positioning a Hero within the applicable highlighted Temple area. Any Hero standing on a Temple will activate it over the course of 2 seconds, beginning to fire off shots at the nearest set of Structures at a rate of 1 shot per second as long as one or more players remain within the capture point. Temples will initially fire their shots at Forts and other outer lane Structures, such as Towers and Healing Fountains. Once all outer lane Structures are destroyed, Temples will then attack Keeps and the inner lane structures surrounding them. Temples will always prioritize their own lane when attacking within the group of Forts or Keeps. After all other Structures (except Walls) are destroyed, the Temples will directly attack the Core.

Each Temple has a total of 45 shots that each deal 450 (+20 per minute) damage. The final five shots of the Temple will fire automatically and in rapid succession for the team that currently has possession of the temple once the first forty shots have been expended. This means that teams can leave the Temples once the charging sequence for the final five shots begins.

The opposing team can contest the location by standing in the capture circle and can potentially steal the Temple for themselves. Teams will need to coordinate and work together to harness the full power of Sky Temple's map mechanic.

When a team captures a Temple, they will have to battle the Sky Temple Guardians which will attempt to protect the captured temples. There are five Guardians surrounding the capture point. The first Guardian deals the most damage and will use a knockback attack in an attempt to remove Heroes from the capture point. After 10 shots have been fired, two smaller, ranged Temple Defenders step down from their posts to attack nearby Heroes; after another 15 (25 total) shots have been fired, another pair of ranged Temple Defenders step down. The Temple Guardians can be defeated in order to stop their damage; however, defeating them will not affect the progress of the temple objective itself. The Temple Guardians will prioritize attacking the team currently controlling the capture point, which can help the opposing team if a Temple is being contested. After a Temple has been exhausted, any remaining Temple Guardians will automatically despawn.

The location of the next Temples will appear on the Minimap 30 seconds after all Temples have been depleted.