Heroes of the Storm Wiki
Register
Don't have an account?
Sign In
Advertisement
in: Seasonal events
English

This Nexomania, the biggest brawlers in the Nexus will don colorful costumes and square off in no-holds-barred battle. Check out new Skins for Lunara, Sonya, Diablo, Garrosh, E.T.C., and Kharazim—plus adorable Mounts!

La Parca Lunara and La Pantera Sonya are looking to recruit new tag-team partners for Nexomania, a contest where Heroes battle it out to become the Champions of the Nexus! Choose your partner, train up, and conquer the competition to claim the spoils of victory before Monday, June 11. Each of the four-part quest chains below grant different rewards based on who you side with, and the quests must be completed in order. Choose your partner wisely, because once you’ve picked Lunara or Sonya, your decision cannot be undone! 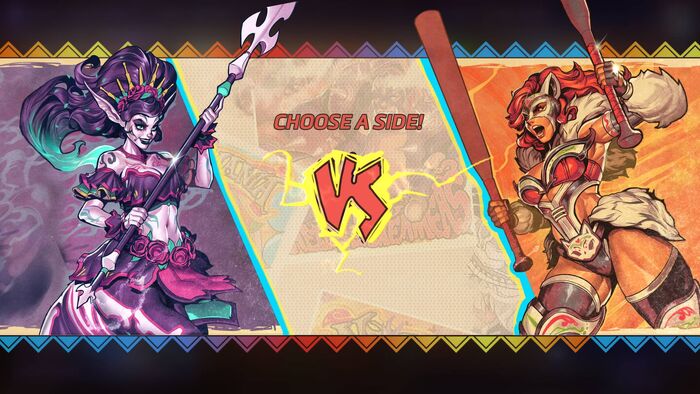 Lunara and Sonya are scheduled for an epic grudge match, and the whole Nexus is getting in on the action.

Players choose a side in this Quest and earn a different set of seasonal rewards depending on their decision. Choose carefully—once you choose a side, the other questline will become inaccessible. (Don’t worry—rewards from both questlines will be available in Loot Chests during next year’s summer event.) Quests become available on May 22.

Starting the week of May 22, Loot Chests earned through progression (except Hero-specific Chests), Heroes Brawl, or by spending Gems will be Nexomania Loot Chests. These Loot Chests guarantee at least one item from the Nexomania or Sun’s Out, Guns Out events. Step into the ring and start leveling-up to pin down some loot before the competition concludes on June 11!

Andrew Kinabrew, who created the original concept for the Legendary Mariachi Reaper skin in Overwatch, came up with a Luchador Diablo concept shortly after joining the Heroes team. He believed the skin could be part of a greater event and championed it internally for years, working to convince others, too. Finally, the Luchador Diablo domino elbow-dropped: others started to embrace and pursue the idea. A design manager used his previous experience writing for a wrestling game to help brainstorm wrestling moves. Another artist who grew up watching lucha libres with his family made concepts for other Nexomania skins.

“The animators came up with really cool poses. And then our community team made cool luchador masks for us,” says Trevor Jacobs, a Blizzard veteran of 24 years. “Even getting an announcer, which is usually a pain because you have to do it in every language—people we didn’t expect to become advocates were championing [the event] with us.”

The event inspired everyone to add a little bit of themselves to its creation. Kinabrew, who is originally from New Mexico, adds that it was his opportunity to represent his home and family in one of his favorite games.

“[In New Mexico] we have a lot of Latino influence. My wife is Mexican-American,” he says. “It just reminds me of home."[1]