The Mystic Kingdoms is one of the many multiverses of the Nexus. It has a distinctly Eastern theme. 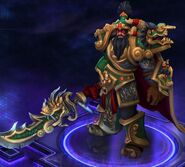