Midgard is a location within the multiverse of the Nexus. Very little is known of its universe, except that it is under constant threat from the Jotunheim Republic and their frost golem army. To this end, Midgard created the Thunder Guard to protect them.

The following heroes are from this universe. 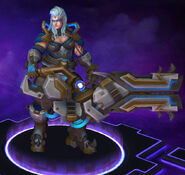 Zarya as a "Thunder Guard"

Retrieved from "https://heroesofthestorm.fandom.com/wiki/Midgard?oldid=45482"
Community content is available under CC-BY-SA unless otherwise noted.