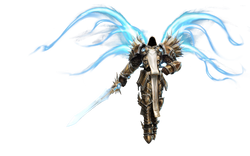 Matchmaking Rating (also known as "MMR") is a number calculated for each player to match them with players of similar skill.

The intent behind MMR is to match players by skill. This is accomplished by comparing an assigned number (MMR) that adjusts based on the relative MMR of the opponents players win or lose to. Matching players by their effectiveness or performance helps make sure that less experienced players aren't always playing against expert players, and that competitors at all levels are earning their victories by battling players of roughly equivalent ability.

Players will receive a boost to their uncertainty rating during Season One placement matches.

Uncertainty represents how confident the system is in knowing that players belong at their current rank or rating. Boosting uncertainty allows for significant adjustments to be made to MMR during placement matches.

New Heroes of the Storm players who enter matchmaking modes will initially only be matched for games on certain Battlegrounds. As they complete more games, new players will unlock additional Battlegrounds as follows:

The matchmaking system was updated to include a performance-based data-driven system, which takes individual player performance into account when determining MMR gains and losses. Under this new system, players will now reach their intended Matchmaking Rating quicker and more accurately.

Retrieved from "https://heroesofthestorm.fandom.com/wiki/Matchmaking_Rating?oldid=50563"
Community content is available under CC-BY-SA unless otherwise noted.