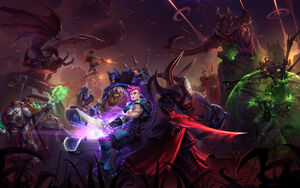 The Machines of War[1] was a StarCraft-themed event in Heroes of the Storm, that began on September 13, 2016[2]. The event added two battlegrounds, the Braxis Holdout and the Warhead Junction; two heroes, Alarak and Zarya; seven skins; and two mounts. Alarak became available immediately at the start of the event, and Zarya was released two weeks later. The event concluded on October 17, 2016.

The event was available for testing on the Public Test Realm starting on August 30, 2016.[3]

Worlds collide as the Koprulu sector enters the Nexus, setting the stage for battles that will shake both realms to their core. Two new battlegrounds filled with signature StarCraft carnage await: time to let the nukes fly and unleash the fury of the Swarm on your enemies. Dominate the battlefield as Alarak, the Tal'darim Highlord, a brand-new arrival to the Nexus hailing from the sci-fi epic Legacy of the Void. Don new, themed Hero skins and fight side by side with familiar characters seen through the lens of StarCraft. The terrans, protoss, and zerg are no strangers to conflict, but the coming war across the Nexus will prove to be more intense than anything they have ever known.

Hell, it's about time.

Xel'Naga artifacts have begun to appear all across the Nexus, and SCVs are being deployed to collect them. Terminate the interlopers with extreme prejudice and collect artifact pieces! To participate, log into the game and play. You'll get a daily quest to collect artifacts. At the start of a match, artifact pieces and SCVs may appear. Collect pieces to restore the artifact, but watch out for SCVs trying to interfere!

∗Dates may vary slightly by region. [2]

The pool of Battlegrounds available in all modes, except Custom Games, are temporarily limited to the following: