Start a Wiki
"Luxoria is the most unique of the Nexus' realms I have seen, with its own pantheon of gods, including Ka, and the Spider Queen Neithis. I do not know what became to the others, but their absence bodes ill."

Luxoria is one of the realms of the Nexus and the location for the Sky Temple. It is a realm of vast desert sands[1] which are ever shifting.[2] It features long forgotten tombs.[3] Luxoria has a pantheon of deities, but in the present, only the Snake God Ka and the Spider Queen Neithis remain.[4]

In its distant past the realm was ruled by the Scarab Swarm.[2] It is/was ruled by Pharaoh Ta-sadar, who willingly let Luxoria be consumed by the Nexus as an alternative to the Scorpid Swarm of the Darkworld, led by the Desert Queen and the Serpent King.[5]

The dead have a habit of returning in this realm.[6] Genies exist within this realm; beings of immense magical power who usually guide and influence mortals by appearing in their dreams.[7] There are also many whimsical creatures that inhabits the Sky Temple, such as Flying Monkeys.

For centuries, the Order of the Bronze Tiger has trained its disciples for the return of the Scorpid Swarm. Now, at long last, the time has come to put their skills to the test.

Multiverse versions of some Heroes are from this universe. 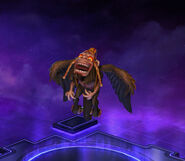 Brightwing as a "Flying Monkey" 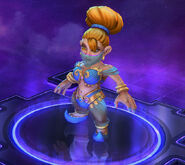 Chromie as a "Dream Genie"

Kharazim as a "Bronze Tiger"

Xul as the "Serpent King" 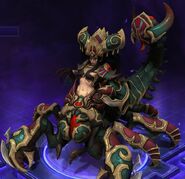 Zagara as the "Desert Queen"

Retrieved from "https://heroesofthestorm.fandom.com/wiki/Luxoria?oldid=50628"
Community content is available under CC-BY-SA unless otherwise noted.