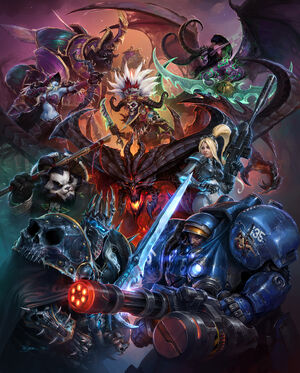 The following is a list of heroes for Heroes of the Storm. They are sorted primarily by universe. As of November 2015, there were nearly 200 heroes considered for inclusion.[1] As of BlizzCon 2017, there are 180 heroes intended for inclusion.[2]

The following designations are made in regards to heroes:

There is, and will be, more heroes from the Warcraft setting than other Blizzard settings due to the size of the Warcraft universe. However, the developers intend to try to split the hero roster along Blizzard's major universes.[4]

Heroes from The Lost Vikings, Rock n' Roll Racing, and Blackthorne will be included in the game. However, there are likely to only be one, maybe two Lost Vikings heroes.[4]

It's unlikely that skins will be implemented that are taken from Justice League Task Force.[9]

Dustin Browder estimated that there could be up to 60 heroes at the time of the game's release.[10]

Retrieved from "https://heroesofthestorm.fandom.com/wiki/List_of_heroes?oldid=52351"
Community content is available under CC-BY-SA unless otherwise noted.