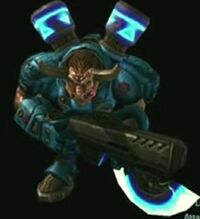 Level 80 Elite Tauren Chieftain (or L80ETC) was a playable tauren marine in early builds of Heroes of the Storm. He has since been replaced by E.T.C.. A version of him appears as a skin named "L800 ETC."

The Level 80 Elite Tauren Chieftain defeated the Lich King once a week. Then one Tuesday he took on a Trans-Dimensional-Murloc-Puddle-Jumper. In a flash of magic, a vortex was opened that sucked L80ETC across space-time to the Koprulu sector.

L80ETC was armed with a gauss rifle and had a thick skin. He used advanced technologies to defeat his opponents and benefited from strength items. He had the following stats and abilities:

Retrieved from "https://heroesofthestorm.fandom.com/wiki/L80ETC?oldid=53091"
Community content is available under CC-BY-SA unless otherwise noted.