Edit
watch 01:36
We're Getting Mutants in the MCU - The Loop
Do you like this video?
Play Sound

Hanamura was a large two-lane Battleground set within the sprawling grounds of Shimada Castle. Payloads were the key to victory on Hanamura: escort a Payload to its final destination and deal damage to the opposing team's Core. On August 8, 2017, the original version of Hanamura was removed from all game modes except Custom Games in order to undergo changes. On May 22, 2018 Hanamura was also removed from Custom Games while work continues on map changes. Hanamura was re-releasing on September 4, 2018 with heavy changes: Hanamura has been renamed to Hanamura Temple and has received a significant gameplay update. The in-game information in this article is kept purely for historical purposes.

Much like Towers of Doom, Heroes will not be able to directly assault the opposing core, but must instead find victory through use of the map's unique mercenaries, taking down the Mega Enforcer boss, and actually escorting the Payloads!

Hanamura has two lanes with all of the objectives located at the top and bottom which sprawl towards the center of the map. 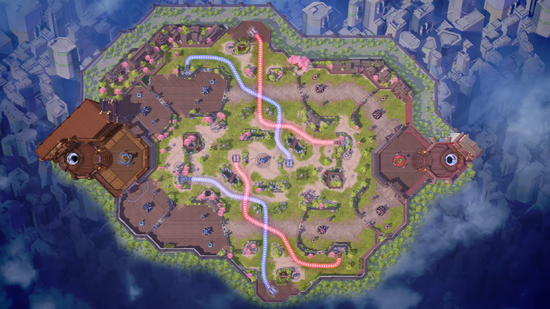 Right-click a power-up to collect it, and then use the "Map Mechanic Ability" hotkey (Default: F) to activate it.[2]

Defeat the Mega Enforcer found at the center of Hanamura to fire 1 shot on the opposing Core.