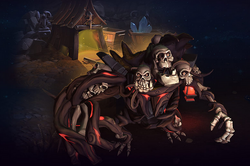 Grave golems are summoned through the collection of skulls on the Haunted Mines battleground. Visual distinctions represent how many skulls have been used to summon the golem.[1]

These camps respawn at a rate of 180 seconds.

The grave golem originally possessed more heads, and had a patch of land on its back on which a tree grew from. This hindered visibility of the golem so the tree was removed.[2] 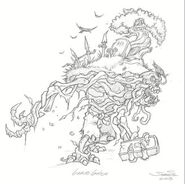 Concept art
Add a photo to this gallery

Retrieved from "https://heroesofthestorm.fandom.com/wiki/Grave_golem?oldid=47390"
Community content is available under CC-BY-SA unless otherwise noted.