Ghost Protocol is an all-Nova snipe-battle on Towers of Doom. Be sure to practice your aim before heading into battle, because every shot counts in this game mode – Snipe not only instantly kills enemy Heroes, but it also reduces the enemy team’s Core health by 1. 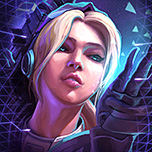 Retrieved from "https://heroesofthestorm.fandom.com/wiki/Ghost_Protocol_(Heroes_Brawl)?oldid=39958"
Community content is available under CC-BY-SA unless otherwise noted.