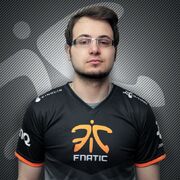 Fnatic is a professional Heroes of the Storm team based in the United Kingdom, Europe.

The organisation was founded by Sam Mathews and Anne Mathews on the 23rd July 2004 and registered as a company in Australia in the same year. Apart from its headquarters in London, United Kingdom, Fnatic also has offices in Belgrade, Serbia as well as a gaming house in Cologne, Germany. The organisation is widely known for a variety of teams, most particularly in having one of the most successful Counter-Strike 1.6 teams in the world.

In October 2014, Fnatic expanded into Heroes of the Storm, announcing a temporary team for the BlizzCon Exhibition Tournament, featuring key players from the StarCraft II and League of Legends competitive scenes.[1]