Start a Wiki
"The Eternal Empire needed a force against rebellion after centuries of betrayal. I am that weapon. Through me, peace and order will be brought to the galaxy. Only the meddling Star Princessses, the sisters, stand in my way. I am Space Lord Leoric! And my empire will live forever!"

The Eternal Empire is a conquering force that has consumed many worlds. While some have said that its name is presumptuous, those who uttered such words are now among the ranks of the dead.[1] It employs a number of space lords in its ranks.[2] The empire possesses the strength to destroy entire stars.[3]

However, it suffered centuries of rebellion. To quell such dissent, Space Lord Leoric was created/appointed to stamp out betrayal.[4] The Space Lord has brought countless worlds under the empire's thrall.[5] Now, only the Star Princesses of Earth stand in the empire's way. Sensing an opportunity to finally gain the advantage over those meddling princesses, Leoric was dispatched to swiftly bring the Nexus to heel under their command.[4]

A number of heroes are from this universe.

Alexstrasza as the "Dark Queen" 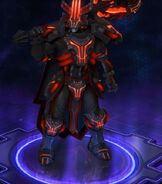 Leoric as the "Space Lord" 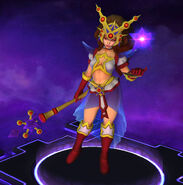 Li-Ming as a "Star Princess" 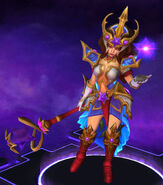 Li-Ming as a "Star Queen"

Medivh as the "Knight Owl" 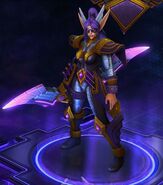 The Eternal Empire mythos appears to draw reference from both Star Wars and Sailor Moon as well as He-Man and She-Ra.

Retrieved from "https://heroesofthestorm.fandom.com/wiki/Eternal_Empire?oldid=52231"
Community content is available under CC-BY-SA unless otherwise noted.