There are multiple versions of the Earth that exist within the multiverse of the Nexus. One of them is an alternate version of the Overwatch universe, another is based within the Eternal Empire, while the third seems to be based on super-heroes.

A number of Heroes are from this super-hero version. 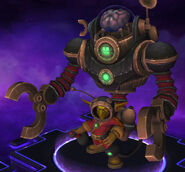 Gazlowe as the "Mad Martian" 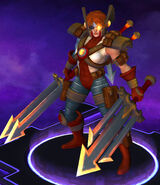 Sonya as "Super Sonya"
Retrieved from "https://heroesofthestorm.fandom.com/wiki/Earth?oldid=45485"
Community content is available under CC-BY-SA unless otherwise noted.