Heroes of the Storm Wiki
Register
Don't have an account?
Sign In
Advertisement
in: Battlegrounds, Dragon Shire, King's Crest
English

The first Shrine event will activate 90 seconds into the match, following a 30-second warning. Shrines will consistently be activated 2 minutes after a Dragon Knight has been killed.

These lush and deceptively peaceful gardens have grown over time, covering the once molten realm known as Dragon Spire. Beneath this verdant paradise, the ancient power of the dragons was sealed away... and their descendants have neither forgotten nor forgiven the trespasses of those who wronged them.[1] 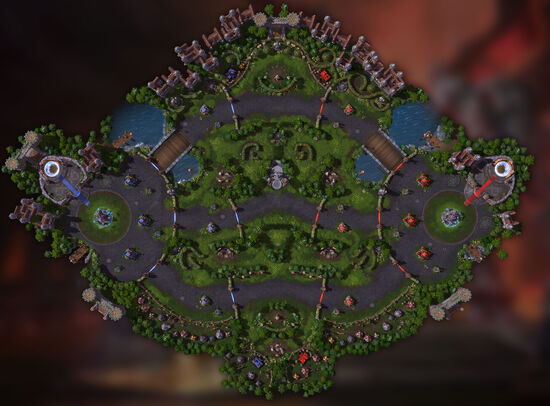 There are five Mercenary camps to be recruited in this battleground. Mercenaries are disabled during the Primary Objectives.

The unique objective revolves around capturing and holding the two shrines while a hero channels the Dragon Altar.