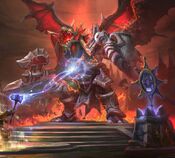 The Dragon Knight is an available summon in Dragon Shire. It can be awakened by a team possessing both sets of obelisks and channeling into the Dragon Altar. A hero can then become the Dragon Knight. The Dragon Knight form lasts for a couple of minutes and grants the hero a massive power boost. It cannot be targeted by allied talents or abilities.

The Dragon Knight deals double damage to minions and has a base health of 8350.

As a summon unit, Dragon Knights carry the following properties, unmentioned in their ability list:

Retrieved from "https://heroesofthestorm.fandom.com/wiki/Dragon_Knight?oldid=52784"
Community content is available under CC-BY-SA unless otherwise noted.