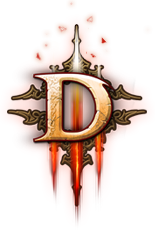 Diablo is a major Blizzard Entertainment franchise, and one of those represented in Heroes of the Storm.

Diablo is an action-role playing dark fantasy series, deriving its namesake from its chief antagonist. Set primarily on the world of Sanctuary, it is based around an eternal conflict between the angels of the High Heavens, and the demons of the Burning Hells, with mankind caught in the middle.

The concept for Diablo originated with Condor, which was purchased by Blizzard Entertainment and renamed as "Blizzard North." With the closing of Blizzard North in 2005 however, Blizzard (South) has taken over development of the series.

Compared to Warcraft and StarCraft, Diablo has the most realistic art style;[1] humans are more normally proportioned, and the series has a "darker" and more "intense" art style, sitting on the opposite end of the spectrum from Warcraft.[2] For Heroes of the Storm, Diablo heroes are designed to look more in sync with their Warcraft counterparts,[1] to be less dark and shadowed.[2]

There seems to exist a version of the Diablo universe within the Nexus. A number of Heroes from other franchises are from here.

Junkrat as a "Fallen" 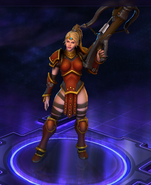 Sylvanas as a "Raven"

Retrieved from "https://heroesofthestorm.fandom.com/wiki/Diablo_(franchise)?oldid=47006"
Community content is available under CC-BY-SA unless otherwise noted.