This is from the Warcraft universe. 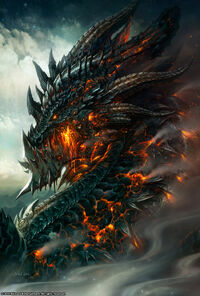 Deathwing(Bruiser) The Destroyer is an Melee upcoming hero Warrior for Heroes of the Storm.[1] The possibility of adding him has been discussed frequently by the game's developers,[2] but he was decided against inclusion due to his size-yet, his teaser trailer was launched.

There is currently no official source listing his abilities or features.

Well actually there is but I'm too lazy to type them out. Nobody updates this site anymore.

Retrieved from "https://heroesofthestorm.fandom.com/wiki/Deathwing?oldid=53188"
Community content is available under CC-BY-SA unless otherwise noted.