Start a Wiki
"An ancient evil has emerged from the forgotten darkness, manifesting itself in forms that are familiar, and yet… twisted. What you see before you are reflections of the heroes and villains they seek to emulate—avatars who know only contempt and wield utter chaos. Behold the power of the Dark Nexus!" 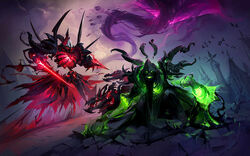 The Dark Nexus is a realm located either inside or opposition to the Nexus proper.

The Dark Nexus is tied, almost at a primordial level, to the base and chaotic nature of the Nexus proper.[1]

The avatars of the Dark Nexus are twisted reflections of heroes and villains. While they may wear familiar guises, they are, in truth, chaos and hatred incarnate...an ancient evil that can only be bargained with, never controlled.[2] They are essentially distilled to their most pure, malicious, and hate-filled elements. In the history of the Nexus, no-one has been able to control these beings.[1]

In order to overcome the Grave Keeper's rebellion at the Towers of Doom, the Raven Lord summoned two beings from the Dark Nexus, setting them loose upon the Grave Keeper's forces.[5] Somehow, he had found a way to control these beings, a feat that none had managed before him.[1]

Retrieved from "https://heroesofthestorm.fandom.com/wiki/Dark_Nexus?oldid=50773"
Community content is available under CC-BY-SA unless otherwise noted.