Heroes of the Storm Wiki
Register
Don't have an account?
Sign In
Advertisement
in: Battlegrounds, Cursed Hollow, Raven Court

"Cursed Hollow" is a three-lane haunted forest battleground set in the realm of Raven Court. The Raven Lord of the forest demands Tributes, which appear in various locations within the forest. If a team collects 3 Tributes, their enemies become cursed, causing their Forts not to attack and reducing their Minions to 1 Health.

The first battleground objective will activate 3 minutes into the match, following a 30-second warning.

As one of the first and most ancient realms pulled into the Nexus, the realm of Raven Court has grown large and prosperous over the millennia. The province of Cursed Hollow, a gothic landscape of twisting villages and farmlands, serves as an ideal trial grounds for the Heroes of the Storm.[1]

The "Cursed Hollow" battleground has three lanes with all of the objectives located in a forest in between them and mirrored about the main diagonal of the map on the opposite north and south sides. 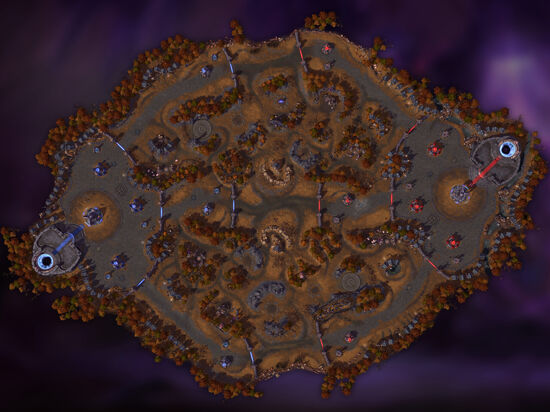 There are six Mercenary camps to be recruited in this battleground. Mercenaries are enabled during the Primary Objectives.

The unique objective revolves around paying Tribute to the Raven Lord in order to curse the enemy team.

Example: Tribute #2 spawns top left. Tribute #3 spawns top right. Because of rule 2, Tribute #4 will spawn in the bottom row, but since Tribute #4 is the first Tribute of a new set, rule 3 does not apply, and so the column will be random.[2]