This is from the Warcraft universe.
"Hi! I'm Crabby! It looks like you're easter-egg hunting! Can I help?"

- Crabby on the menu screen(src)

Crabby, the Dungeon Helper is a character from the Warcraft universe, incorporated into the Battle.net launcher of World of Warcraft.

Crabby can appear on the loading screen of Heroes of the Storm, in the form of a constellation. He asks the player if they want help with finding Easter eggs, mimicking his intro lines in World of Warcraft. 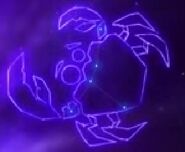 Crabby's constellation
Add a photo to this gallery

Retrieved from "https://heroesofthestorm.fandom.com/wiki/Crabby?oldid=45575"
Community content is available under CC-BY-SA unless otherwise noted.