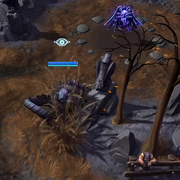 Dehaka hiding in a bush

Bushes are part of the enviroment of a battleground lowering vision of the pathways. A player within or behind a bush cannot be seen by the enemy team. This is indicated by a "blue eye" hovering above the hero. You can hide in them to make yourself invisible until you are damaged, an enemy is in the bushes with you or until you do damage yourself. They can also take the form of smoke from vents like in Blackheart's Bay.

Some hero abilities and talents can interact with bushes.

Iit's important to recognize that if you can't see the enemy team on your minimap, they very well could be in a bush waiting for you. Facechecking is quickly stepping into a bush (literally with your face) to see if any opposition is inside, before quickly exiting the bush. The reason this is bad, is that if there's one or more enemies in that brush, they'll see you coming and can kill you very easy. Facechecking with a squishy is bad, facechecking with a tank is 'less bad', but is still often a poor decision.

Using an ability from a distance to find out what's in the bush, whether it's a skill shot, AoE, or a scouting drone, is considered good play because you can find out who or what is hiding in a bush before venturing forth.

Universally, pro players will tell you that it’s more important to respect the fog of war than it is to respect your opponent in lane. In every bush and shadow an enemy (or five enemies) could lurk. Unless their hand is forced, top teams do not show on the map unless they want to, often attempting to create misdirection and luring an enemy into a false sense of comfort. Most of the time—specifically with Heroes like Stitches, Li-Ming, and Malfurion — professionals will tell you that you shouldn’t be afraid to throw out spells blindly if there is even a remote chance of connecting.

Death bushing, otherwise referred to as “Chinese Bush Meta,” is a very simple playstyle. You and your teammates wait in a bush for unsuspecting passersby and perform a coordinated takedown. While this technique is usually in play towards the late game with the aim of securing the final kill needed to push for core, it has its merits early on.

The phrase “Chinese Bush Meta” was originally coined by Daniel “Artosis” Stemkoski at 2016’s Spring Championship, which was arguably the best performance that the Chinese region has shown to date at an international event, as former world-class caliber teams eStar and EDward Gaming (EDG) found their way through to the semifinals. Why is death bushing a thing? Many signs point back to a time in Heroes esports history when most of the top Western teams first began utilizing Falstad for his Gust Heroic, often taking the High Thane of the Wildhammer Clan early in the draft. Asian teams responded by drafting stun-lock compositions and waiting patiently in a bush for the unwitting global assassin to chance by.

While coordination-intensive, the death bush counter was successful in removing Falstad from a team fight before the fireworks could even begin. Without Gust, a key component for engage and escape (referred to back then as a “get out of jail free card”), many Western teams would fall apart, while Asian teams would take their pick and snowball their advantage.[1]

Abilities and talents that interact with bushes[edit | edit source]