This Heroes Brawl is the first battleground to feature attack/defend style mechanics and introduces asymmetrical gameplay to Heroes of the Storm. On Blackheart’s Revenge, only one team has a Core. They must gather cannonballs, load them into the cannons located around the docks, and fire on the ship in hopes of sending Blackheart to a watery grave. Defenders must assist the ghost pirate in his siege by stopping the attacking team from collecting enough cannonballs to sink the ship before it reaches its destination. 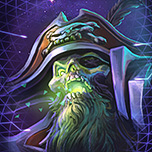 The event features as an attraction in the Blizzard World map in Overwatch.

Retrieved from "https://heroesofthestorm.fandom.com/wiki/Blackheart%27s_Revenge?oldid=49259"
Community content is available under CC-BY-SA unless otherwise noted.