Heroes of the Storm Wiki
Register
Don't have an account?
Sign In
Advertisement
in: Battlegrounds, Mistharbor, Blackheart's Bay

The ghost pirate Blackheart has staked his claim upon the realm of Mistharbor. His raucous undead pirate crew has poured onto the streets, claiming the once thriving marketplace as their new den of vice and villainy.[1]

Blackheart's Bay is a three-lane Battleground with a dock's theme set on Mistharbor. Its unique objective is Blackheart's ghostship which will bombard enemy buildings if a team can gain the ghostly pirate's favor by collecting Doubloons. Players can expect consistent clashes between the two teams because of the coordinated effort to manage doubloons alongside the normal map elements such as Mercenary Camps.

The first Doubloon Chest spawns 90 seconds into the match, following a 30-second warning. Doubloon Chests will spawn 3 minutes (paused during the cannon firing event after a team turns in enough Doubloons) after the final Chest of the previous event has been captured.

The "Blackheart's Bay" battleground has three lanes with all of the objectives located near the middle and top lanes. 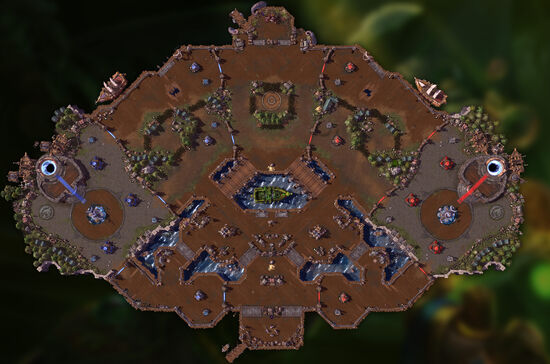 There are ten Mercenary camps to be recruited in this battleground. Mercenaries are enabled during the Primary Objectives.

The Primary Objective revolves around gaining the favor of Blackheart to bombard the enemy base.

There are four main ways to obtain Doubloons: Treasure chests, Doubloon camps, Mercenary camps and stealing them from enemy Heroes. Any Doubloons on the game remain there indefinitely until picked up.

At the center of the map, Blackheart and his ship wait for Heroes to bring him Doubloons. Heroes must channel for 8 seconds near Blackheart in order to give him doubloons. If the player is damaged while channeling, the channeling is interrupted. A team must give Blackheart 10 Doubloons to have cannonballs attack the enemy team's Structures. Subsequent turn-ins for that team increase the requirement by 2 Doubloons with each turn-in..