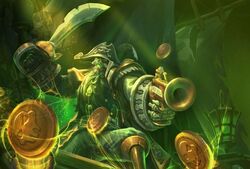 Blackheart is an evil pirate lord[1] and an undead one at that. He and his undead pirate crew seized the realm of Mistharbor, turning it into a den of vice and villany.[2]

Blackheart is found in the center of the Blackheart's Bay battleground. He is the person players will want to see when turning in your doubloons, however giving him the doubloons take a 6 second channel, giving the opposing team a lot of opportunities to interrupt - any damage taken immediately interrupts the channel. The first team to give Blackheart 10 doubloons wins Blackheart's favor assisting them for a short duration of time. While assisting his favored team his Ghost Pirate Ship trains its cannons at the opposing team's fortifications, each shot dealing massive amounts of damage to both buildings and heroes unfortunate enough to be caught in the blast. After 12 shots, 3 per building, he becomes neutral and is available for hire again.

Retrieved from "https://heroesofthestorm.fandom.com/wiki/Blackheart?oldid=39730"
Community content is available under CC-BY-SA unless otherwise noted.